How Captain Data developed their integration to Make in 48 hours

Guillaume, co-founder of Captain Data, explains how the idea of this challenging experiment came up and how it went. 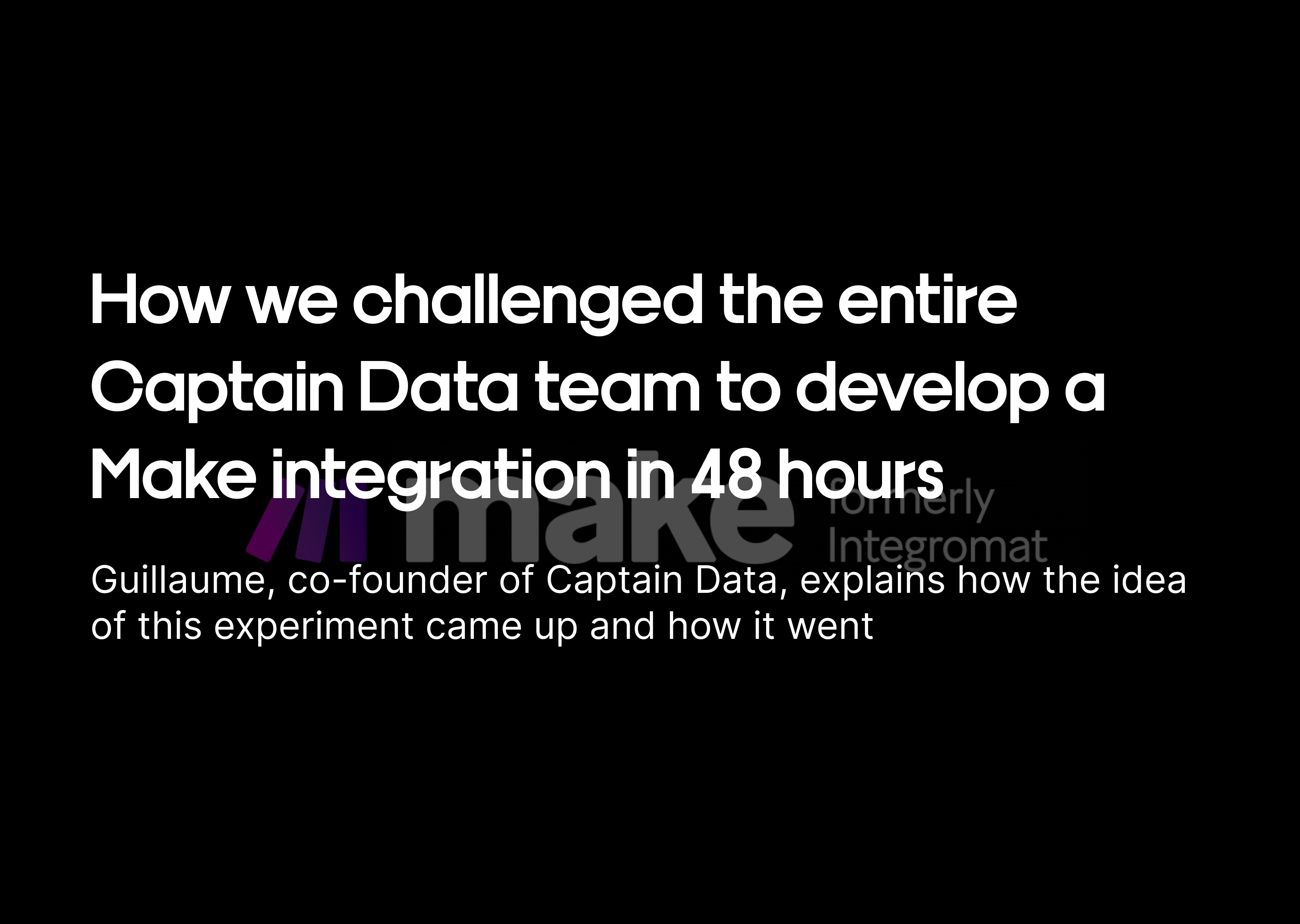 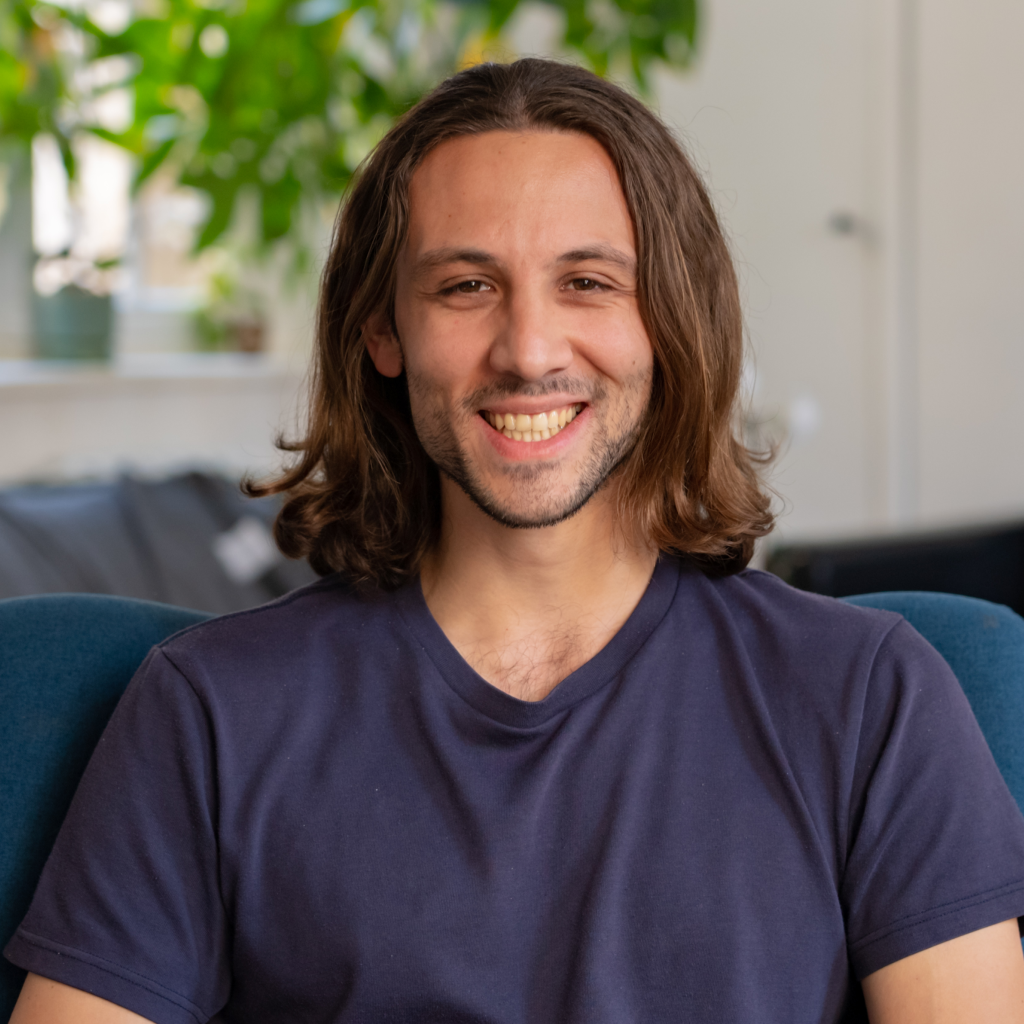 At Captain Data, we love a good challenge.

This summer, I’ve challenged the team with a new format, “Wednesday Revenue”: a two hours session dedicated to hardcore experiments in a very short time window.

I’m Guillaume, co-founder at Captain Data, and here’s the story of how we came up with the idea and how it went down.

Where does the idea to launch a Make Integration in 48 hours come from?

Life in a startup is full of challenges.

As a founder from day one, you’re pretty much on your own: from building the product, to closing your first sales, then recruiting your first employee.

On your own, meaning with your own learning curve. And it’s a pretty steep one!

Mathieu, Marc and I are first time young entrepreneurs, and we’ve never been employed.

That’s great in the way that we don’t take anything for granted, we don’t have any models, or bad experiences.

Being idealists and always trying to give others the best working conditions, we’ve always been pretty disappointed to hear stories about other companies, or our friends telling us things like “tech and sales don’t know how to talk together”, “I don’t like sales people, they’re arrogant”… you get the picture.

Communication issues and “politics” in companies are tough, but it’s happening, whether you want it or not.

As both a founder and an idealist, I’ve always had the idea that Captain Data would not reproduce such schemas.

Meaning that teams will HAVE to talk to one another and that everyone will be aligned on the big picture.

Easy on paper, harder on the day-to-day 😅.

There are squads that naturally do it, like Product, because otherwise they won’t be doing their job as they should.

At the moment at Captain Data, our current objectives are focused on revenue: we built the product, the brand, the team, we now need to hit the pedal when it comes to making dollars.

Having recruited everybody, I thought to myself “that’s a shame a developer does not really see the impact they have on revenue or customers” and “how can we make sure we leverage the maximum revenue we can with the help of the whole team?”.

Of course, Sales is responsible for accounted dollars, but at some point, the whole company needs to have a strong impact over revenue, otherwise, what’s the point?

I did not want to do something that would be repetitive and that would resemble day-to-day tasks, but rather something new, fresh, that would take their mind at a new challenge, something else, something powerful and intense.

How did you end up choosing the hackathon format?

In June, I talked with Guillaume Cabane at B2B Rocks, where he made his speech about how companies “need to experiment fast”.

As he talked, I realized we were not equipped to launch as many experiments as he was talking about: you need a squad, with at least a Growth Marketer, an Engineer, and a Product Manager.

That’s when the idea popped in naturally - “let’s use the whole team then!”.

When I first presented the idea to Marc (Sales/ops) and Mathieu (Tech), let me tell you that Mathieu was not happy 😂.

I looked at him and said: “You can’t tell me we can’t allocate two hours per week per person for something that could have such a great impact”.

The topic was easy to find and select: most of our best customers use Make (ex-Integromat), and adding something like this to the roadmap is not always easy since you need to de-prioritize something else on the core product.

Turning the idea into a concrete, real-life experiment

So here’s the format we ended up choosing:

- Three sessions of two hours to prepare everything, from mockups to tech reviews, guides and sales materials
- One-day hackathon: I added an extra day for the tech team for this challenge since it’s quite a big piece as a first project

Here’s the layout of the sessions:

Presenting the experiment, the big topics, assigning squads to tasks (approximatively) and the minimal requirements in terms of product.

Focusing on what was the most important tech-wise - product mockups and technical analysis, and business-wise - communication plan and sales deck.

On this session, we made sure Product and Tech were aligned and that what we wanted to do product-wise was doable.

Funny enough, we had to make two versions of the product wireframes because Make’s documentation is… well, let’s say it’s complicated to use 😅.

This day was solely dedicated for the Tech team, to develop 90% of the product.

After the hackathon, we realized we still needed an additional session to launch a review, to be featured on Make’s marketplace, and that a few additional back and forth was inevitable.

We selected two “Tech champions” to follow-up on this, in order not to use the whole team.

Why did you choose Make for your first Hackathon and what was the possible outcome you first imagined?

It was definitely a bold move to choose Make as a first project.

After all, that’s generally the kind of integration that takes weeks to launch, especially given the depth of product we chose to implement.

You can now literally do almost everything that you can on Captain Data’s UI, on Make.

We decided to set the bar very high for this first experiment to get a better understanding of what we could do in such a short amount of time.

We knew the hackathon would not lead to a 100% ready product, but we were expecting at least 80-90% completion.

There was no place for second thoughts, we had to give it all as failing (i.e. not succeeding to launch) was not an option 💪.

Mostly because Make is something we know very well, we’re using it daily, and it’s quite similar to Captain Data. We were confident we could do it.

When I first envisioned this format, I did not have Make in mind, meaning a one month running experiment over 4 sessions, but rather topics that could be tackled in one or two sessions.

What’s great having started with Make is that we probably won’t ever do something that difficult again.

I mean, even if you use Make a lot, I’m pretty sure that when you’ll see what we’ve done with it, you’ll be blown away.

We’ve literally pushed Make to its limits 🔥 and it’s powerful!

Key takeaways of the experiment

The general organization, i.e. who does what, when, for when… is absolutely paramount.

We kind of rushed blind on the first experiment, though I did spend quite a bit of time preparing the kick-off (roughly two hours).

Hopefully, I exactly knew the product requirements beforehand: what was expected for the Sales team and the technical challenges that could rise.

All in all, you need to choose subjects that you master.

And that you master as a team, not just yourself: every new employee at Captain Data has to use Make during its onboarding, so we know everyone was already a bit familiar with the tool.

You can’t afford people to be spending two hours on something nobody on your team knows at all otherwise… well, otherwise two hours is your session slot so you get the picture 🙂

We’re a team of twenty people, not that much, but even so, you can’t expect to be working in the same Google Meet with the whole Tech team (10 people) and the entire Business team.

Segmenting activities is key: you have to start with what needs to be done and who owns it, it needs to be perfectly clear for everybody, and people need to be accountable for it.

This way, rather you’re 20 or 40, you’ll still be able to follow this format - though project management wise I think 20 is the maximum to align everybody correctly!

There’s one person I didn’t use enough, mostly because the job and the person was new in the team, that’s my man Charlie.

Charles is responsible for… Operations 🙈. Let me tell you that I won’t be doing the same mistake twice: having someone like Charles to pilot such projects is very helpful.

Charles has the ability to work with every squad, align them on topics, dates, etc.

Also, do not deviate from someone’s expertise: if you need to develop an API and a front-end developer wants to do it, don’t choose this person for the task - you want to go fast, use the best person suited for the job, period.

Such experimentations are intense enough, you should not add an additional layer of challenge.

One of the topic I talked about at first in this article is how I envision team communications, i.e. every team should speak to one another.

That project was clearly a success to emulate teams, motivating them like never before, but I think we’ll have to try different things to emulate even more communication cross-teams.

I think in the next experiment we’ll do, we’ll create mini-squads of 5 people, something like 1 product owner, 2 sales and 2 tech.

This way they’ll have but no choice to tackle the same topic together.

One of the big outcome of this first experiment, is that we’re going to do everything we can to instill this “growth” and “impact” mindset throughout every thing we do, every day.

Not just when we’re focusing on experiments, but rather giving everybody the means to understand the impact they have, or should have, over growth and revenue.

Growth is not just a compound of dollars accounted for, but rather how the team participates in every efforts of such growth.

I know, I’m talking a lot - I thought the story would be as interesting as the results, my bad 😇.

Did we manage to meet our expectations? Yes, and more!

Was it hard? Extremely challenging indeed.

Did we really do it in 48 hours? Technically, yes! Even though the span lasted a bit over a month, given we had 4 sessions and holidays.

I’m proud to say that our Make integration is ready to be used, be ready to be blown away 😎

The official release date is in the hands of Make’s team as they’re reviewing the application as we speak.

We’ll be adding a lot of content materials, articles and videos, to show you what you can do with this integration.

We’ve even added a “Revenue Box” - a box full of ideas for our next sessions!

Can’t help but had a look and it seems like we don’t run out of ideas 😅.

Stay tuned for our next challenge 🤘

Captain Data uses the name and logo of third-party services to inform you how it is possible to use its services according to your needs. Captain Data has no connection with any services that may be mentioned on its site.